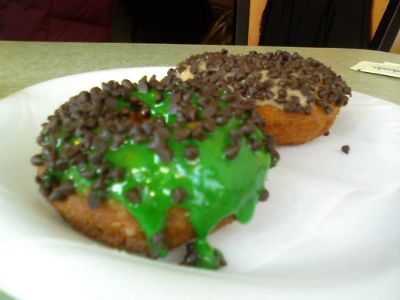 I ate a doughnut.

Not only a doughnut, but an especially unnatural one with St. Patrick’s Day green icing! Oh, sweet mercy, I’m going to hell.

I have a house full of healthy food, and instantly, I attempted to cancel out my crime by zapping and eating a “Sweet Earth Natural Foods” Greek Burrito, “a savory blend of organic white beans, fresh baby spinach, feta & oregano. Hemlock-free!”

Now, I don’t know if the part about it being Hemlock free means that hemlock is an issue with organic Greek-themed products, or if it’s a reference to the Greek thinker Socrates, who was tried and found guilty of impious acts and forced to drink a poison containing hemlock.

Speaking of impious acts, in our crazy world we don’t actually talk about moral sin anymore. We don’t want to be judgmental. But boy, howdy, do we have manufactured sin out the kazoo.

Have a carbon footprint — you can buy carbon credits, or virtue points to offset your carbon footprint (selling redemption like the Church used to sell Indulgences in the Middle Ages, not that I’m judging) — or use an environment-destroying plastic grocery bag, or eat at McDonald’s, or drink a Big Gulp-sized soda, or wolf down a green doughnut (and, even more heinous, actually enjoy it), and you are screwed.

Bad, bad person! I could be wrong, but I’m pretty sure that when I go to meet my Maker, the green doughnut is not going to come up, so to speak.

But I may have to eat my weight in kale and do a whole lot of recycling before they let me back in the Whole Foods again.