I’m a mature adult, with important responsibilities and a certain amount of dignity… until Andy Gibb comes on my 70s lite rock Pandora station singing “Everlasting Love.” All of a sudden, I’m back in junior high, when he was a huge heartthrob. OMG! “We killed the pain, we blew away the memories of
the tears we cried, and an everlasting love will never die!” No, it will never die, Andy Gibb. I would have been so much better for you than Victoria
Principal – oh, hi, kids, Mommy’s just doing some improv, nothing to see here.

It is hard to carry on a conversation, or even remember your train of thought when a dog sits in the middle of the room and goes to town licking his or
her private parts, or has other issues, for example, digestive trouble.

I would love to go back in time and live in a mediaeval village, where the church tower is the highest point in the town and the bells of the church toll
the times of the day. If I could have hair dye, hygienic products and a lifetime supply of Charmin Sensitive toilet paper with aloe. And sunscreen, and
some type of moisturizer. 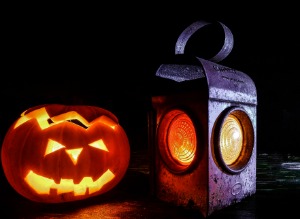 Pumpkins make me happy, but they also make me sad, because the minute you cut them to make a Jack-o-Lantern, they start to rot. I like fake pumpkins, because they don’t rot, and you don’t have to throw them away and feel guilty that you took a pumpkin’s life. But they’re fake, and fake pumpkins don’t support farmers, and they don’t have seeds that you can roast. They also don’t have guts that you can take out and get all over your hands and then pretend
to sneeze and gross out your kids. But fake pumpkins don’t die, and you can put them away in a cabinet until next year, a little orange friend just waiting for fall to roll around again.

If men are outside in nature and need to urinate, they just do it. Who can blame them? If I could, I would, too. There, I said it. Not on a building or car or anything gross, but behind a tree or large bush. However, I would bring hand sanitizer.

Why, when I use the brush to darken my eyebrows, can I achieve absolute perfection with one eyebrow – a glorious arch, worthy of Ava Gardner – and the
other one looks like it belongs on someone else’s face? It’s as if I have asked that one eyebrow very nicely to do something, and it says, “Oh, hell no!”  Why is this happening?  That would be a good title for my memoir.

When we were kids and one of us would yawn and not cover our mouth, my mom would say, “Cover your mouth! You can see Gibraltar in there!” It is so
ingrained that I have to stop myself from saying it to strangers.

I am really getting sick of the zombie brain-eating thing. Also, do zombies poop? Because if they eat, they must poop. They probably don’t wipe.

Similarly, and I do have experience as a medical writer working in the field of urology, so maybe I have extra insight here, but I’m pretty sure that if
they have no heartbeat and no blood or body fluids, Edward and other vampires in the “Twilight” world wouldn’t have the hydraulic, mechanical or genetic
capability to sire a child.