I am on Day 4 of a virus that features a low-grade fever and horrible, wracking, prolonged cough.  My husband has it, too.  In fact, he’s had it for two days longer than I have, and he still feels awful.

Maybe it’s the fever, but this morning I woke up and imagined I was in an old Warner Brothers movie.  Not a real stretch for me; I’ve watched so many of them over the years.  Black and white, of course.  Starring Warner Oland or Peter Lorre and some people with either real or fake British accents.  Aristocracy in the middle of the jungle, or on the Escarpment (I don’t actually know what that is, but I watched a lot of Johnny Weismuller Tarzan movies as a kid, and the Escarpment was where the Great White Ape lived), or on the desert in Egypt.

The group varies, but usually includes an archeologist; some aristocratic guys of prime marriageable age; a silly, foppish sort of guy with a name like Cedric who provides comic relief; a formidable, very rich older lady played by Margaret Dumont or someone of similar presence; a beloved patriarchal figure played by someone like C. Aubrey Smith; and a secretary or companion whose family has fallen upon hard times so she has to earn her keep, but it’s okay because one of the rich dudes is falling in love with her and will soon rescue her from drudgery.  There is usually some hidden treasure.

Margaret Dumont and the Marx brothers

The ladies have that short, crimped 1930s hair, and they manage to stay nicely coiffed even though they’re living out of a tent; they probably heat a curling iron over the fire or something.  Everyone dresses for dinner – black or white tie, long gowns, pearls – from the many steamer trunks they brought, carried by natives.   Cigarettes are carried around in silver, monogrammed cases.  There is always a full bar’s worth of alcohol available.

“The bearers ran off when the drumbeats started.  Two days ago, we sent Neville out to look for them, and he hasn’t returned.  Nigel’s fever is worse, and the hideous drumbeats grow louder and louder.  I fear I’m going mad!  Mad, I tell you!” 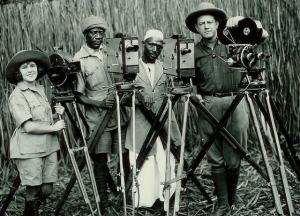 A menacing shadow appears outside the tent, made huge in the light cast by the small lantern.  The lady backs up in fear, and bites her knuckle.  A knife flashes.  The lantern is extinguished.

Three weeks later:  “We have begun to eat our dead.”

Okay, I made that part up.  But still, I’m hearing the drumbeats.

A fever that drags on.  It’s not much of one – 99.6, 99.8, 99.9, 99.4, etc. – but I’ve written enough medical stuff over the years to know that it often starts with a virus, that somehow compromises the immune system, or over activates it, and then there you go.  That’s how the illness starts.   A horrible cough.  Seriously, my ribs hurt.  It’s so bad, I have to prop myself up on something during a coughing fit.   It’s gross.  I’m a pariah.  Run away from the leper.  Save yourself!

I admit it, I don’t handle being sick very well; you may have guessed this.  I’m a terrible patient.  I have realized, though, that most of the time I don’t feel this way.  Most of the time, in fact, I feel pretty good, so I’m really grateful for that.

But for the last few days, all I have felt like doing was binge-watch “House Hunters,” on HGTV and Netflix.   I want to look away but I can’t.

On “Tiny House Hunters,” for instance, one lady said, “Is that the bathroom?  It’s tiny!”  And from my spot on the couch, I croaked, “Duh!”

Other gems from the regular “House Hunters” show:

“I wanted granite countertops with stainless steel appliances.”  If I had a nickel for every time I’ve heard that on this show…

“This fits all our parameters!”  Who says that?

“I’m disappointed that there’s no carpet, just the hardwood floors.”  For the record, I have never, ever felt that way in my entire life.

“I’m more into aesthetics (a woman says condescendingly to her husband) than you.”  I hate it when people put down their spouses to make themselves sound superior.  Hint to these people: You sound like a jerk.  Also, your sense of style is really pedestrian. 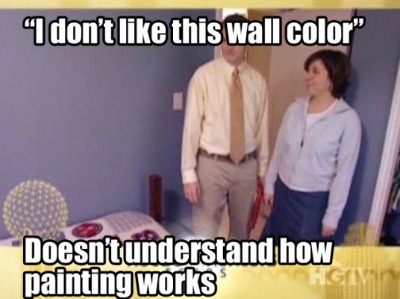 Or, on “International House Hunters:”

“Can we get a king-sized bed in here?”

“This refrigerator is half-sized!”

“There’s no storage.”  Come on, people, you’re in Europe, or Indonesia, or Africa.  If you really wanted the “en-suite master bath” on your student visa budget you should have stayed home.   Also, you wouldn’t need so much storage if you didn’t have so much crap.

The drumbeats are getting louder.  I’m surrounded by morons.  I’m going mad.  Mad, I tell you!