I am not in compliance.  Yes, I admit it freely, I am a scofflaw, a reckless disregarder of arbitrary, mandatory, policy.

My crime?  I have not completed mandatory training.

For the PTA.  And, because I’m an officer of the PTA, the secretary, I need to complete not only the “Basic” PTA course, but the Local Secretary course, too.  I have tried; my computer won’t play the course.  I installed Silverlight, whatever that is.  I have disabled my ad blocker.  Still, the mandatory video has only sound and no picture.  There is a test at the end, and I won’t be able to see the questions to answer them.  I spent the better part of an hour trying to get this thing to work, downloading it repeatedly.  What a waste of time.

Let’s just think about this for a minute: Our PTA is lucky to reach double digits when we have our meetings, which are the first Wednesday of the month.  It’s just a few moms.  We’re all busy, but we show up because we care about the school.

In return, the Arizona PTA has told us that we must complete mandatory training, or we will not be in compliance, and somehow this means they can take our money.

Think of “Jurassic Park,” at the end, when the T-Rex has just kicked serious velociraptor butt, howling or screeching – or whatever it is that genetically engineered Tyrannosaurus Rexes hatched in an incubator with amphibian DNA added to whatever was trapped in the mosquito embedded in the amber do – in triumph, as the tattered banner falls from the ceiling like giant confetti.  The banner reads:  “When Dinosaurs Ruled the Earth.”

Now, picture some room full of pasty lawyers. They have just decided that a bunch of mom volunteers need to complete video training courses and take a test.

It doesn’t matter, we said so.

What if they don’t do it? 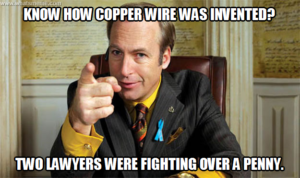 We’ll punish them.  We’ll say they’re not in compliance, and then we’ll seize their treasury.

They’re the ones who are hurting the school!  By not being in compliance!

Guess what?  These mandatory videos are the new big thing.  All the insurance companies must have gotten together and decided that this is the key to not getting sued.  My husband is a doctor.  He had to watch a series of mandatory videos about safety rules and regulations.  Again, there was the threat:  The hospital would hound doctors until they did it, and punish them if they didn’t.

My mother-in-law is a hospital chaplain.  She is nearly 80.  She is very part-time, makes hardly any money doing the job, but does it because she wants to help people and serve the Lord.  Guess what she had to do?  Watch mandatory safety videos.  Otherwise, she wouldn’t be in compliance.

These videos are a joke.  They are timed, so you can’t speed through them.  All you do is stare at them and then click the “Next” button – when you’re allowed to.

I am tired of bullying.

I’m tired of my phone and computer forcing me to install things and update things, or else.  My son, Andy, is in college.  He paid his tuition, then signed up for a meal plan.  The meal plan appeared in his shopping cart.  He came home to get a check and found that he had been bumped from all his classes because the computer decided he had not paid his tuition.  This is not new; years ago, I received a notice from Vanderbilt University that I would not be allowed to graduate if I did not pay my library fine, which I didn’t realize I had.  I raced down to the library and paid it.  How much was it, you may be wondering?  Hundreds?  Thousands?  It was forty cents.  Pay up or else.

Somewhere out there, some lawyers are standing on a table and howling in victory.  The complacency and arrogance – that by forcing other people to do what they decide needs to happen, and punishing them if they don’t, they are actually doing something virtuous – is so thick, you could cut it with a knife. 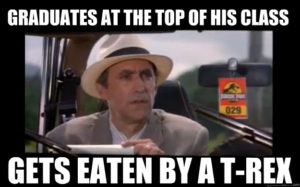 I sigh and think instead of what the T-Rex did to the weaselly lawyer in Jurassic Park.

It’s not mandatory videos.  It’s this feeling that we are supposed to be sheep, herded along for our own good by those who know better.

Blair, my daughter, just got married, and then had to go to the courthouse to register the marriage license and the Social Security office to change her last name.  I think you may see where this is going.  She is her mother’s daughter.

I received this text from the courthouse:

“I don’t understand why the government needs to track me like cattle.  We are like one step away from an ear tag with a number on it.”

“Why does the government need to give me approval and take my money in order for me to get married?  Why do I have to report a change of address within 10 days?  Why do their long, creepy fingers have to be involved in every step I take?”

She was not in the best frame of mind, then, to move on to the Social Security office.

This one is my personal favorite:  “Why do government offices always smell like cat pee and disappointment?” 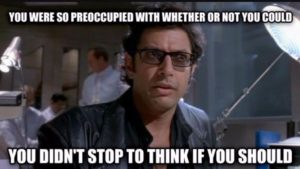 “I had to enter my SSN when I came in here, and yet they are calling people by numbers and not their names.  What kind of bland, Orwellian BS is that???”

“Yes, and you are an artist and wonderful, funny person who will not be defined by a number.”

“Off with their heads!” I texted back.  “Vive la revolution!”

There was no revolution, but we felt better.

And I can think fondly of the T-Rex.

That is, if that kind of thinking is still allowed.