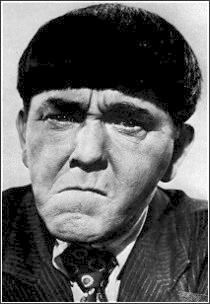 Well, it’s Monday.  That’s about the only reason I can find for why annoying people, and even an annoying animal, seem to be coming out of the woodwork today — and it’s still morning!  There’s plenty of time for more of them to show up!  For example:  I went to Starbucks to get coffee for Mark, who was so tired when he left for work that he forgot to take his travel mug.  He needs his coffee.  He’s also allergic to milk, so I ordered a Pike’s Place with soy. “One Pike’s Place with cream, anything else?” said the girl. Yes, I said, it needs to be soy, not cream, and explained why. “And did you want another drink?” No, I said. “Well, when you kept talking, I thought you wanted another drink.” What the heck!  No, I just didn’t want to give my husband something that would make him sick…  To quote Bugs Bunny, “What a maroon!”  When I kept talking — who says stuff like that?

Then, I went to Fry’s, the West Coast version of Kroger.  I had just started to unload my cart, and the guy said, “Fry’s card?”  I was behind my cart, trying to get my groceries up on the conveyor belt as fast as I could, because there were people behind me.  I said, “Yes, just a minute.”  The man folded his hands.  Let’s just pause for a moment to reflect on how supremely annoying this was.  He refused to ring me up until I handed him my card.  He said it was store policy.  I know it’s not, because I shop there all the time, and they usually just start scanning away as soon as the groceries start rolling along toward the cash register.   And yet, there he was, with his hands primly folded in front of him like — I don’t know, a schoolmarm or something.  So I pushed my cart up a few feet, handed him my card, then went back to loading up.  What the heck!

And then, the icing on the cake,  I pulled into my driveway, and just standing there, basically blocking the entrance, was a coyote.  He looked right at me, brazen as anything.  Such contempt!  Such sass!  If he’d had a middle finger, he would have flipped me off.  I moved my car closer, and he finally moved away and peeled off into the woods, but I’m even getting attitude from wildlife today…  What the heck!

Now, the refrigerator repairman is here.  So far, so good.  He seems to be pretty nice, and the only good thing about having so many failing appliances is that at least I know the guy, because he’s been here for the dishwasher and garbage disposal — both of which, like the refrigerator, turned out to be 13 years old, from when the previous owners rehabbed their kitchen.

Now, I realize that the actions of other people are their problem, not mine.  I know, I know … be the change you wish to see, I can’t change the world but I can change myself, poop happens, deal with it, turn the other cheek, look for the good.  But it’s hard to act like Jesus or Gandhi when I’m feeling more like Ralph Kramden on “The Honeymooners,” muttering, “One of these days, pow!  Right in the kisser!”  Or Moe Howard of “The Three Stooges” … “why, I oughta…”   I guess that’s the point.  It is hard, but I don’t want to sit around muttering all day.  So this is me, officially letting it go and moving on with what I hope will be a better day.