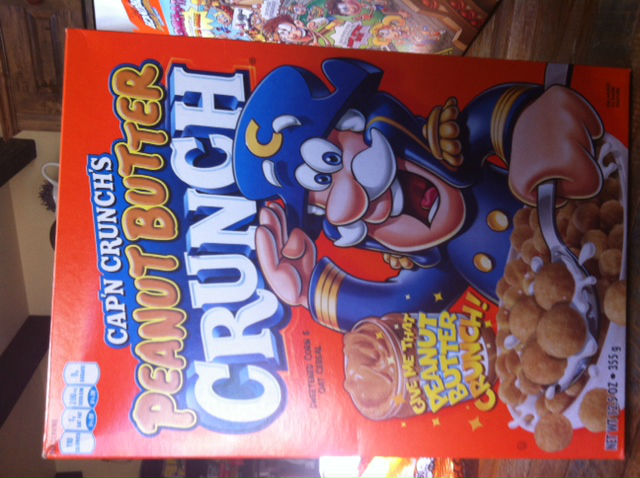 Captain Crunch’s Peanut Butter CRACK.  That’s what it should be called.  I have a problem.  I love this cereal.  I’m Sherlock Holmes, it’s cocaine.  I’m our dog, Roxy, and the Captain is rawhide.  I’m not going to lie; the Captain and I have a history.  I thought it was over long ago.  Then, my son, Andy, bought some, I had a couple pieces and all bets were off.  We reconnected.  That box is gone and I just went and bought another box.   I don’t even put it in milk, I just eat it right out of the box.

Don’t  judge me.  Carl Jung would judge me.  He said:  “Every form of addiction is bad, no matter whether the narcotic be alcohol, morphine, or idealism.”  Way to bring down the room, Carl.  Go sit on the downer couch with Edgar Allan Poe, who said, “I have absolutely no pleasure in the stimulants in which I sometimes so madly indulge.  It has not been in the pursuit of pleasure that I have periled life and reputation and reason. It has been the desperate attempt to escape from torturing memories, from a sense of insupportable loneliness and a dread of some strange impending doom.”  Edgar — or do you prefer Edgar Allan, or simply Mr. Creepy — you missed out, buddy.  If you had self-medicated with the Captain, maybe you would have cheered up a little and not written about tell-tale hearts, brick wall tombs, and ravens.  Also, you could have worked a fun maze on the back of the box.

Remember the loser couch in the snobby Omega fraternity in “Animal House,” where Larry Kroger and Kent Dorfman are taken to sit with Jugdish, Mohammat, Sidney and Clayton?  “Don’t be shy about helping yourselves to punch and cookies.”  Maybe Edgar and Carl could sit there for fun party smalltalk.

My diet is not without balance.  Because I also have Whipstone Farm.  Here in Prescott, Arizona, we have great local farms, and we bought a farm share with Whipstone.  Every Tuesday we pick up a huge bag of fresh vegetables.  We got the flower share, too, so in addition to eating greens, carrots, turnips, tomatoes, and broccoli just about every day, we will have fresh-cut flowers in the house until October.  Pretty nice!  My younger son, Josh, is my farm buddy.  He goes with me to pick up the veggies, and then he helps me find recipes.  His favorite vegetable is kohlrabi.  We never had it before we started the farm share last year.  It’s in the cabbage family, a funky-looking bulb with long stalks sticking up like antennae and leaves at the top.  We blanch the greens and then toss them in sesame oil and soy sauce, and we cut up the bulb and make a quick pickle, with rice vinegar, a little olive oil, salt and pepper.

In the movie, “The Natural,” Robert Redford plays this kind of mythic baseball player, Kim Basinger is a temptress out to ruin his game, and Glenn Close is his childhood sweetheart, who stands for all that is right and good.  She stands up as he is batting, and when he sees her in the crowd, he hits one out of the park.  I’m not saying the Captain is all bad, or that kohlrabi is Glenn Close, which would be weird.  I’m hoping for moderation in all things.

And maybe another handful of Peanut Butter Crunch.

Houston, Wii have a problem

Looking for a Summer Thriller?
Scroll to top