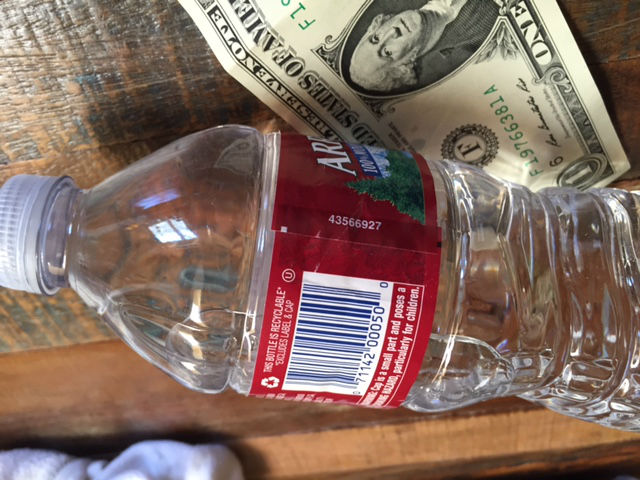 We were already two minutes late for school, and Josh and I were two lights away from glory, or Prescott Mile High Middle School, whichever came first.  Right turn ahead: We had the green light!  Yeah, baby!  And then I put on the brakes because there was a woman in the crosswalk, crossing against the light.  Our green light!  She stopped in the middle of the street.  I stopped, too.  We made eye contact.   I made an impatient grimace and waved my hand for her to cross, about as ungraciously as I could.  I’ve been feeling guilty about it ever since.  I could have smiled and waved her across, and maybe made her whole day.  Instead, I probably messed it up.  I was George H.W. Bush in the 1992 presidential debate with Bill Clinton, impatiently checking his watch after an annoying question.   I was irritated, we were late, I took it out on her, and it felt bad even at the time.  Now it feels worse, because the whole way home, I was thinking: I have a hard little nugget of a heart.

Even when I do the right thing, it’s often not with a good heart, with joy and delight at the opportunity to help someone.  It’s with a grudging heart, like the Grinch pre-Christmas morning. There’s a lady who asks me for rides sometimes.  I always say yes, but I don’t like it.  The whole time, I’m sighing loudly in my head.  It’s not really even that inconvenient; it’s just the principle of the thing!  Let’s just stop and think about that one for a minute:  what principle?  My principal desire not to be bothered!  What the heck!  Prescott has panhandlers out the kazoo.  Just about every time I go to the grocery store, bank, or post office, there’s another one, holding a cardboard sign with the mandatory, “God bless you,” or “Anything helps.”  Yada, yada, yada.  I don’t like this.  And yet, every time I open the Bible, it’s as if God is just putting the message in my face, “Help the poor. Help the needy. Love other people.”  Aw, man!  Dang.  So, grumble, grumble, grumble, I give them a few dollars and one of the bottles of water I keep in my car.  When I do it, I am actually glad to have made the effort, but I sure didn’t want to, and I go through the exact same struggle the very next time I see one.  I’m Lionel Barrymore in It’s a Wonderful Life.  “Back in my day, we worked for a living!  We worked, I tell you!  And we walked to school, uphill both ways, in our bare feet!  On sharp rocks!  We didn’t have anything handed to us!”  Actually, I’ve had a lot handed to me, so I can’t even try to pull that one off.  I know how lucky I am, and I also know that I don’t know anything about the scruffy guy not making eye contact holding out the sign, and I don’t have the right to judge him.  But I still don’t like it.

I have given truckloads of stuff to Goodwill over the years.  But mainly I did it to get rid of my crap.  There, I’m confessing that, too.  So I have been thinking a lot, and having conversations with myself like this: “You did something that helped someone.” “Yes, but I didn’t want to do it.”  “But you did it.”  “But I didn’t like it.”  Does it count, on the big moral abacus in the sky, when you do something that’s good, but you don’t want to?  I thought of that story of  the boy who started throwing stranded starfish back into the ocean — or, like my Dad and I have done, saving stranded earthworms on the pavement by flinging them back into the grass after a rain — so they wouldn’t dry out.  A cranky old guy (cranky like me, except with testosterone) says something like, “Why bother, kid? You can’t make a difference.”  Then the kid says, “It makes a difference to this one,” and chucks it in the water.

I called my Dad and asked him what he thought.  He said, “If you do something through gritted teeth, you’ll come out stronger, because you worked through it.”  I also sought the wisdom of Claire Saunders, Associate Pastor at my church, Prescott United Methodist.  In the grand scheme, she says, “doing good, even begrudgingly, never negates the good done.  Offering someone a ride who needs it, even when the inside of your brain is beyond annoyed with it, still gets that person from Point A to Point B.  Giving someone a bottle of water might make a huge difference in someone’s life.  Who knows how far that ‘pay it forward’ type of action might travel?

“We are all a part of this big web of humanity.  We get the choice to be a positive influence or a negative influence on those we encounter on a daily basis.  That can be annoying as heck sometimes.  Which means that often, our ‘good’ is done with a grumble and an eye roll.  Doing good is good, but sometimes our own hardened hearts prevent us from feeling that same ‘good’ that we seek to offer others.”

So I guess the mission here is a two-parter.  One:  Try to do good when I can, especially when I just want to say “Bah, humbug!” and hide under a pillow, because the good deed does still count — even when the heart of the giver is a hard little nugget.    Two: Work on making my heart a little bit bigger and a little bit softer.

I Just Want My Sudafed

The Baltimore We Love
Scroll to top