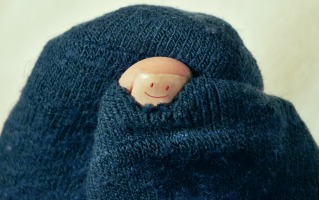 Thank God for funny people.  I’m blessed with them:  friends and family who make me laugh, and whom I love to make laugh.  Laughter is what keeps us sane, I think.  Furthermore, I think we were made that way:  God has a sense of humor.  Just look at the platypus!

Humor is the vitamin that gets me through the day.  For example:

My friend, Karen, posted on Facebook that her son was holding a glass up to the icemaker on the door of the freezer.  Cube, cube, cube – and then a lone chicken nugget!  It must have fallen out of the open bag and into the ice bin, and then… freedom!

My younger son, Josh, has an iPad.  You know how you can scan your fingerprint for a security code?  He scanned his big toe!

Josh loves Siri.  He loves making nonsense statements, and then getting her to read them back.  I heard him saying a bunch of random syllables, and then when she assigned words to them, he loved one particular phrase she came up with.  He loved it so much that, a couple days later, I heard him say, “Siri, what’s my name?”  “Your name is Josh,” she said in her quasi-robotic voice, “but I can call you Chunk God.”

My older son, Andy, was at the dentist’s, and I was sitting in the waiting room.  He texted me from the chair:  “There’s a woman in the chair next to me who really needs to undershare.”

“Talking about her laser hair removal, and how she’s not used to her husband coming into the bathroom and dropping a bomb while she’s in there getting dressed.”

Well, that would put a damper on my day, as well, so I couldn’t really think of anything to say.  Apparently, she kept right on talking, because Andy he sent another text that sounded so resigned, I just cracked up.

Sometimes, moments of grace happen when something might not be that great, but you can find a little bit of the absurd. 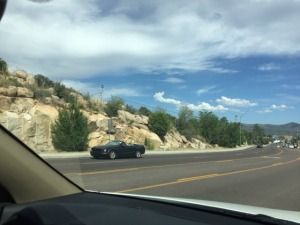 I try to take pictures, too:  Here’s one of a cloud.  Mark and I were driving, and I said, “That cloud looks like it’s flipping us off.”  Mark looked at it and said, “Yeah, it really does!”  We thought it was funny, and he slowed down so I could get the picture.

Here’s another picture, of our dog, Molly, actively sulking.  My daughter, Blair, does hilarious impressions of the dogs, and she can do a great one of Molly being dramatic.  We have three dogs on three different foods with three sets of dietary issues.  Molly felt ripped off and basically said, “Oh hell, no!” when presented with her food.  I posted the picture on Facebook, and a friend said, “Are you 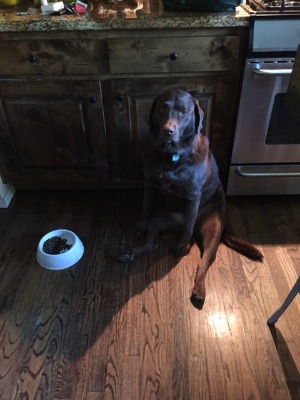 sure she’s not sick?”  I said, “Completely, since right after I took that picture and left the room briefly, she ate Stanley’s entire bowl of food.”  So much attitude, so little time… we could get mad, or laugh, and I’d rather laugh because I think it’s pretty funny.

Last week was a long week.  I had a lot of work to do, and worked right up until suppertime.  My husband, Mark, came home, finally done after being on call for several days at the hospital.  I looked at him and said, “Where’s the wine?”

From across the kitchen, Josh piped up, “A memoir.”

Getting Ready for the Close-Ups

Pulling Back
Scroll to top