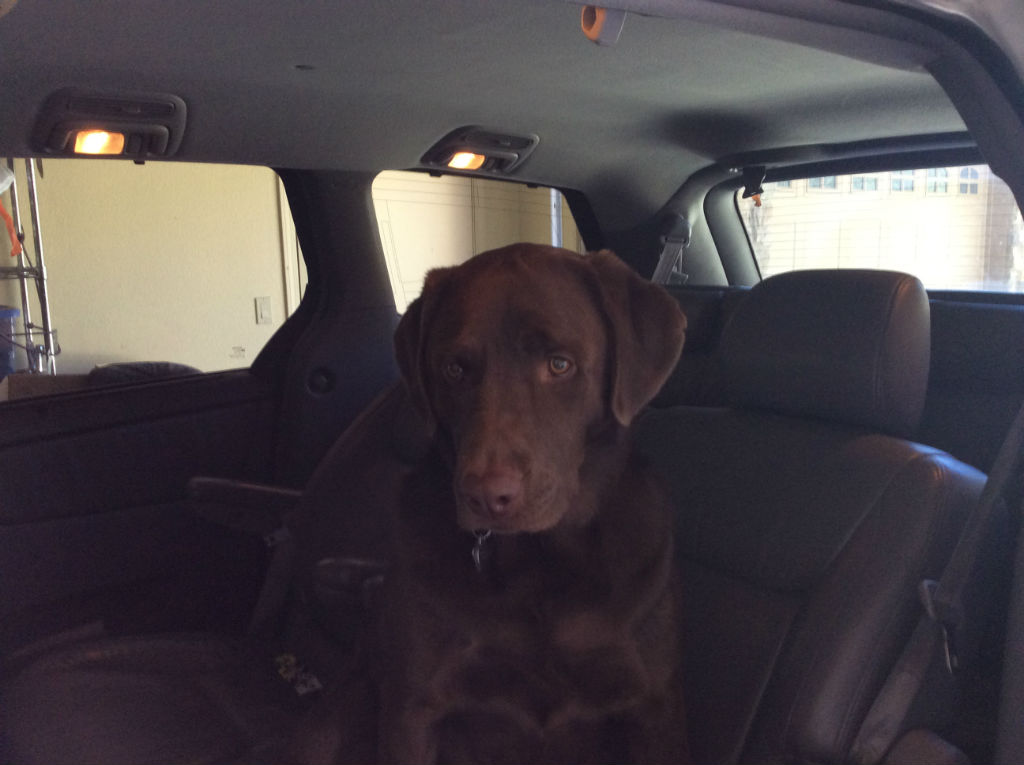 Josh was late for school today.  This is only the second time this year, so that’s really good for us.  Usually he gets there with as many as one to three minutes to spare.  I hate being late.  And yet, I am often late.  Something always happens.  For one thing, the act of picking up my car keys seems to activate Josh’s colon, so there’s that.  “Why didn’t you go when I asked?”  “I didn’t have to go then!”  “You make me crazy.”  “I can’t when you already are.”  “Hurry up!”  “Start the car, I’ll be right there!”  Once there were cute, happy snails right behind the car and we had to move them.

But it’s usually okay, because I have the Mom Mobile, and I know how to use it.  It’s a 2004 Toyota Sienna.  I’ve put 200,000 miles on it.  If you are ever driving before 8 am and you see a woman in a minivan with hand prints and/or dog prints on the windows and a school sticker on the bumper, and that woman looks as grim and determined as John Wayne in “True Grit,” holding the reins in his teeth and firing a rifle with the other, here’s some advice:  Get out of the way.  Every morning in America, millions of minivans and SUVs rocket toward schools.  Maybe the kid, like Josh, is putting on his socks and shoes in there.  Maybe the mom, like me, is quizzing her kid on geography or spelling, eyes never leaving the road.  When Blair and Andy were in high school, many’s the time I would sign some form that needed a parent (forging Mark’s name if it needed both), or scrawl an excuse for the tardy slip while Blair held the wheel.  My kids have all come up through the ranks as co-pilots.  “Andy, I need my sunglasses.”  Andy whips out the case, holds it at just the perfect height, while I take off my glasses and make the switch.  “Shades deployed,” he will report.  Co-pilots know that when Mommy goes to the ATM, it’s their job to get the card out, be prepared to take the receipt and cash and put them in my wallet, and zip the purse.  When we’re at the drive-through, they have the correct change ready by the time we get to the window.

So, our ride to Mile High Middle School goes something like this:  Shades deployed.  Hold on tight as we go over the major potholes in our driveway (I have an estimate from a paving company ready to sign, but first we need to fix the roof).  Go as fast as reasonably possible on our dirt road, speed up when we hit the street, have our morning prayer for the family said by the time we get to the stop sign, so I can make that big left onto Williamson Valley Road, a four-lane feeder that will get me toward town.  Speed up around the curves where the traffic cops don’t hide, slow down where they have been known to lurk.  Thread the needle between someone in the turn lane and someone in the right lane.  I’m coming up on the elementary school, which has its own crazed moms and road-clogging minivans clogging the left lane.   Left on Iron Springs, where I can usually zip through traffic like Sandra Bullock driving the bus in “Speed.”  There are a lot of oldsters in Prescott, pleasant retirees — around 8 am is middle of the morning for many — heading to the grocery store, not a care in the world, moseying along and enjoying life.  Meanwhile, I’ve escalated to Steve McQueen in “Bullitt” status, my Defcon 3, except I’m not driving through San Francisco, and instead of the zippy jazz soundtrack, I’ve either got classical music, calming smooth jazz, or if it’s really stressful, the spa channel on satellite radio going.  Also, we’re buckled up.

“Josh, check the time.”  Josh, a good co-pilot, knows this does not mean the car’s clock, which I keep 14 minutes fast as a buffer from life, but the accurate one on my phone.   Molly the Lab, taking up the whole back seat, is oblivious.  She’s biding her time waiting for the much slower drive home, when I roll down the window and she gets to stick her head out.  (Stanley, our Cocker Spaniel rescue, doesn’t really like the car and stays at home.  His choice, he’s always welcome to go, and we always ask.)

Next week, major milestone,  I am getting a new car.  Well, new to me.  It’s a 2007 Honda Pilot, with only 75,000 miles on it.  It is very clean.  It does not smell like chicken nuggets, or fries, or spilled soda.  There is no dog hair.  No empty water bottles rattling around.  No hand sanitizer or Starbucks napkins in the glove compartment (fun fact: Starbucks napkins are really soft and great for nose-blowing if there’s no Kleenex).   It has never hauled members of Blair’s varsity girl’s soccer team or Andy’s cross-country team, never had Josh’s smelly hockey bag left there in the hot sun.  That’s okay.  We’ll break it in.   It’s going to be a great Mom Mobile II.

The Thrill and the Agony
Scroll to top