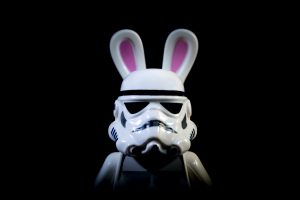 It makes perfect sense that May 4 is a big calendar day for Star Wars fans.  Except, “May the Fourth be with you” sounds like it should be from the movie, “Thtar Warth,” with Printheth Leia and Luke Thkywalker.

And of course, that makes me think of the priest performing the wedding in another favorite movie, “The Princess Bride,” who spoke the immortal line, “Mawwiage…” Tho Fantathtic!

But seriously, folks, I love Star Wars.   I’ve loved it since 1977, when my dad took my brother and me to see the first one (called Episode 4 – we didn’t understand) the way it should be seen, in the movie theater.  I had never experienced anything like it, and even my dad, not a huge Sci Fi fan, cheered when R2D2 was okay at the end after getting blasted.  I remember cranking up the AM radio in the car when either the main theme by John Williams, or the Mos Eisley Cantina song came on.  (Anybody remember a couple years earlier, when the “Jaws” theme was so big, they played that on the radio, too?) 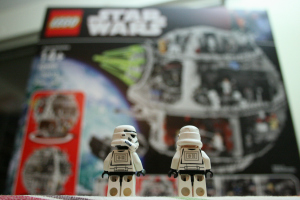 It took forever for “The Empire Strikes Back” to be released, and yes, I should have seen it coming, but as a teenager I was stunned when Darth Vader turned out to be Luke’s father.  And Leia his sister!  I loved Han and Chewie.  I instantly recognized that Yoda was played by Miss Piggy, but I didn’t care.   “Return of the Jedi,” like “Return of the King,” in the Lord of the Rings trilogy, is probably my favorite, but that may well be because of the moon of Endor and the Ewoks.  And the mystical Muir Woods (in beauty, not unlike Tolkien’s Lothlórien) was the moon!

Later on, when our original videotapes got worn out and we got DVDs, we saw that George Lucas had added some scenes to flesh out the original movies.  That was mostly okay, although I didn’t like to see that one of the three Jedi ghosts at the end, Anakin – in his pasty, bald, scarred glory – had been replaced by the ghost of Hayden Christensen.   That’s probably because I didn’t like episodes 1, 2, and 3 nearly as well.  Although I liked Ewan McGregor and of course, anything with Christopher Lee playing a bad guy like the evil Count Dooku is delightful (another LOTR tie-in, of course, is that he was Saruman, so that just adds to the gloriousness of it all).   With my sons, I have watched the entire cartoon series, “The Clone Wars.”  (Those voice-over actors were better than almost all of the actual actors in the episodes 1-3, in my opinion.)

So we’ve combined Star Wars with the Princess Bride, Jaws, Lord of the Rings, and the Muppet Show.

I have also found that, with a little determination, you can take just about any Dad joke – I call them Mom jokes, but no one else apparently does – and make it work for Star Wars.  For example:

Why is Yoda such a good gardener?  Because he’s got a green thumb.

Why doesn’t Yoda pay his bills on time?  He’s always a little short.

The Star Wars opening credits walk into a bar.  The bartender says, “Sorry, we don’t serve your type here.”

A Clone trooper walks into a bar.  “Hey, mate, have you seen my brother?”

The bartender says, “I don’t know, what’s he look like?” 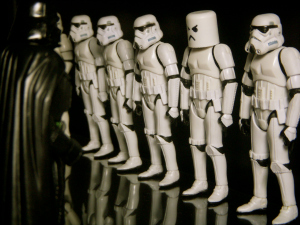 This is funny, because they all look exactly alike…because they’re CLONES! Who can tell them apart?  Only their mother knows for … never mind.

And finally:  Luke, Leia, and Han go to a Chinese restaurant.   Han and Leia are almost done, but Luke has eaten only a few grains of rice.  Finally, the ghost of Obi Wan appears and whispers, “Luke!  Use the fork!”

For one last bit of cultural fusion, I’d like to add the United Methodist Church to the celebration:

May the Fourth be with you. “And also with you.”

My son, Andy, just read this and had one more thing to add:  What thinks the unthinkable?  An itheburg!

“The Dunking Must End”
Scroll to top