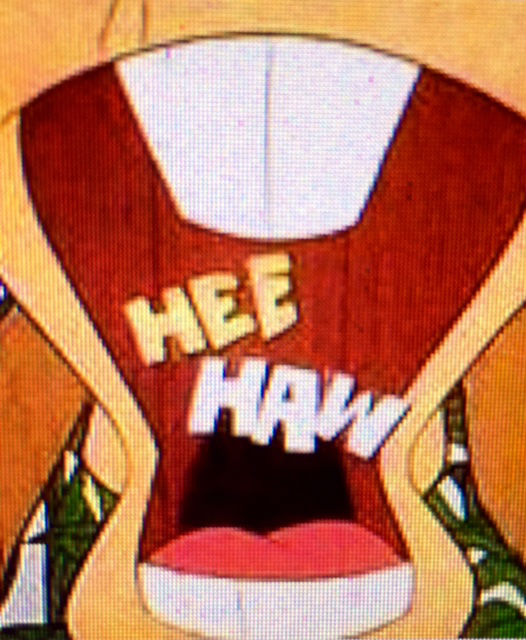 The thing is, as I sing it, I can hear Roy Clark’s banjo and Buck Owens’ guitar kicking in.  That show was a hoot, and if you are of a certain age — and if, like me, you grew up with only four channels and very limited TV options — you may have watched it, too.  When my kids were little, I used to sing, “We’re not ones to go ’round spreadin’ rumors. Really, we’re just not the gossipin’ kind.  Oh you’ll never hear one of us repeatin’ gossip.  So you’d better be sure and listen close the first time.”  There was Grandpa Jones, and Minnie Pearl, and then Archie Campbell, who would sing, “Where, oh where, are you tonight? Why did you leave me here all alone? I searched the world over, and I thought I found true love.  You met another, and (raspberry), you were gone.”  That was a big hit when my kids were babies and I would rock them and sing.  And Junior Samples, at BR-549.  The man was a genius.

I grew up in the South, in Texas and then in Mississippi and Kentucky.  My childhood was punctuated with regional Southern ads that were folksy and sweet — dinosaurs compared to the slick commercials that everybody sees today.  There was a cartoon for Domino’s sugar with a little train chugging along.  “Domino’s sugar, so pure and fine, best sugar on the Sugar Town line… whoo hoo… Sugar Town line.”  There were Dolly Parton and Porter Wagoner, hawking Breeze Detergent with the special enticement of a lovely dish towel in every box.  “But you cain’t buy ’em,” Dolly would say, “You can only get ’em in boxes of Breeze.”

Remember Tennessee Pride?  There used to be a cartoon hillbilly who would sing, “For real country sausage, the best you’ve ever tried, pick up a pound or two of Tennessee Pride…” and at the end, somebody would say, “And they CALL the packages Tennessee Pride!”  I was a pretty good mimic, and I could drive my mother nuts with that one.  Also, in a huge Southern accent, “It’s not fried, Momma, it’s Shake & Bake!”

When I was at college at Vanderbilt in Nashville, Tennessee, there was an extremely local commercial for Emma’s, a florist.  A man would say, “Emma’s, the supuh-lative florist!”

I love local ads, because they show the heart and soul of a town.  In an age when restaurants and grocery stores are largely interchangeable from place to place, it’s so nice to see something not corporate, not fancy, pretty low-budget, made by the people who live nearby.

For that matter, I miss hokey old shows and the respectful nod to our rural heritage like “Hee Haw,” “The Beverly Hillbillies,” “Petticoat Junction,”  “Green Acres,”  and my favorite, “The Andy Griffith Show.”  It’s a shame that I can’t go up to someone much younger than myself (except my kids, whom I’ve indoctrinated) and say, “I’m a-pickin’…” and have the response be, “and I’m a-grinnin’!”