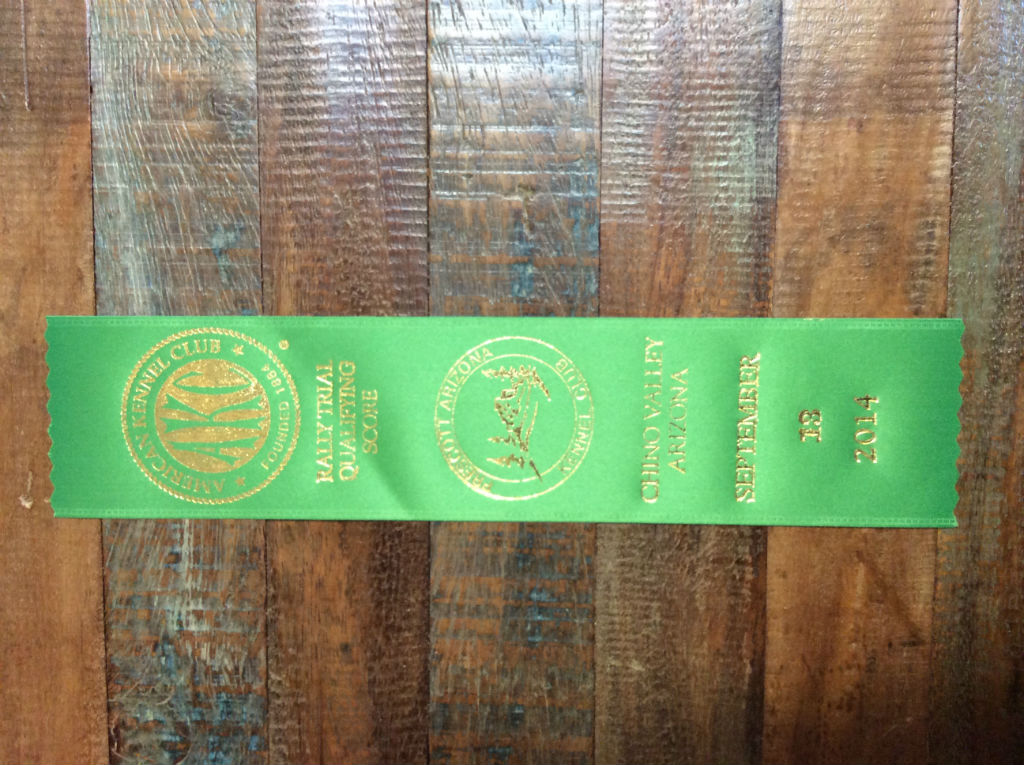 What a difference a day makes.  Yesterday, I was riding on a tide of victory.  Molly and I won a ribbon in our very first Rally Obedience trial!  This victory was particularly satisfying because in the last thing we attempted, the Canine Good Citizen test, we bombed.   In that test, if you fail one of ten things, you fail the whole test, and Molly, then a one-year-old Lab, was incapable of “meeting an unknown dog” without wanting to play.  But she had been doing so well lately.

When we first started going to puppy classes, I used to have to put on the brakes by holding onto buildings and light poles as I unwillingly raced to our downtown class and Molly, who absolutely loves going to school, wanted to get there as quickly as possible.  Really, I would reach out and grab fixed objects just to slow us down a bit.  Everybody thought she was insane.  She even pulled one of the rings off the wall of the obedience studio, to which her leash was tethered, when someone called another dog with a similar-sounding name.

But lately, I haven’t even needed the Easy Walk harness, which at one time meant we could walk down the street like a normal person and dog without having people look at us either with sympathy or contempt.  In class, she not only aced every challenge, but really seemed to like it.  She is one of those dogs who needs to work, who likes having a mission.  She gets what we’re doing in there, and it’s thrilling to see her in action.

Yesterday, we knew the sweet taste of redemption.  A bad citizen no more, Molly qualified!  You have to achieve a score of 70 out of 100, and she got an 80!  She would have gotten a 90 if she had done a “down” when I asked her to, but that’s okay.  We passed!  Even better, the five dogs who competed from our school, the Whiskers Barkery in Prescott, Az., all qualified!  We all got green ribbons!  It was the best.  We laughed and celebrated, and took pictures of our dogs and our ribbons.  Today, I don’t know what happened.  Three of us failed.  Not only failed, we got the score of “NQ,” for “not qualified.”  We didn’t even achieve an actual numerical score.

It was hot, and I guess the dogs were just fried.  Molly and I, especially, were a train wreck.  From the minute we walked into the ring, she ignored me.  No craps were given, as my son, Andy, would say.  “Molly!”  “Molly!”  I kept trying to get her attention as we moved from sign to sign, hating the noise of my own voice as I sounded like an increasingly desperate parrot.  She kept wandering off, and I hesitated to pull her back because I didn’t want to get a “TL” deduction (tight leash, which I didn’t know was a fault until yesterday, when we got marked down for it).  I couldn’t get mad at her, either, because she would just shut down even more, so I had to keep sounding perky even as we baked in the sun and this judge kept writing down all the various ways in which we sucked.  It was a nightmare.  We were the Titanic.  We were the Hindenburg.  We simultaneously sank and went down in flames.  Country and Western!  If she’d had a middle finger, she would have extended it in my direction.  If she’d had an opposable thumb, she would have thumbed her cold, wet nose at me.  At one point, she wandered off to sniff a dandelion!  She was Ferdinand the bull, smelling the flowers!

Of course, I took it personally.  “Molly doesn’t love me anymore.”  But my family was awesome, as always.  Blair sent me encouraging texts before and after the event from college.  Andy, Josh, and Mark came out to support me.  Mark got up early and went to Wal-Mart to get me Mexican Cokes, the only Cokes, as far as I’m concerned, because they come in glass bottles and are made with cane sugar.  He also got water bottles and ice for the cooler, and so we had cold drinks, which were heavenly.  Our friends in the class were great, too.  As we had won together yesterday, we failed together today, and I think I can speak for all of us that, even though we failed, we wanted our classmates to succeed.  One for all, as they say.

When we got home, I took to my bed, so down on myself.  Andy and Josh whipped up chocolate chip cookies from some dough we had in the refrigerator, and brought them to me with a glass of milk.   How could I stay in bed after that? And Molly… as soon as we got home, she was her old self, following me around everywhere, responsive as ever.   Our wonderful trainer, Kathy Morris, said that she refused to be discouraged because yesterday, we were all winners.  She believes in us and we believe in our dogs.  Our hearts will go on.  Celine Dion should sing a song about it.  By the way, Molly is one of two Mollys in the class.  There’s Molly White, a Bichon Frise, and our Molly is Molly Brown, the Chocolate Lab.  Well, who’s unsinkable?  Molly Brown! And if we mess up again, maybe the boys will make some more cookies.