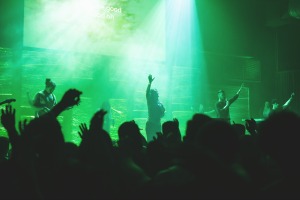 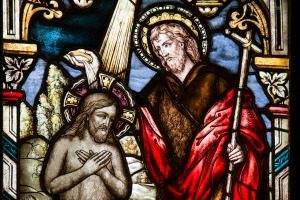 I want to say the Apostle’s Creed regularly in church.

It starts like this:  “I believe in God the Father Almighty, Maker of Heaven and Earth…”  I know the whole thing, but it’s not that brief and I’m trying to make a point here.  I want to sing the “Gloria Patri,” a little song that goes, “Glory be to the Father, and to the Son and to the Holy Ghost.  As it was in the beginning, is now and ever shall be, world without end, Amen, Amen.”

I want to say the Nicene Creed.  I like saying the Lord’s Prayer.   I want to sing the Doxology, the traditional melody.

In short, I miss the ritual at church, the kind of ritual I grew up with.  I find it really, really comforting to say words that were woven into the fabric of my life as a kid.  My own kids, in contrast, don’t know these creeds, because they aren’t said regularly in our church.  I’m not sure why, but I suspect it is because somebody, somewhere, decided they might scare people away.

A lot of churches are not doing well, and as they try to fix what they perceive to be the problem, they may actually be making it worse.  They try hard to be relevant, to reach out to millennials with “contemporary” worship.

As Gimli said in the Fellowship of the Ring, “If anyone was to ask for my opinion, which I note they’re not, I’d say we were taking the long way round.”

There’s big money in consulting, and churches have paid many thousands of dollars to experts who told them how to make the service more hip, accessible, and cool.  Coolness hasn’t really brought in millennials, or anyone, in the hoped-for numbers.

I’m not alone.  Do a Google search on “millennials looking for traditional church,” and prepare to be amazed.  I got “about 536,000 results in 0.61 seconds.”  A lot of people have written about this, and some of what they have to say is pretty painful.

Rachel Held Evans, in a much-cited opinion piece in the Washington Post, said:  “Bass reverberates through the auditorium floor as a heavily bearded worship leader pauses to invite the congregation, bathed in the light of two giant screens, to tweet using #JesusLives. … At the end of the service, someone will win an iPad.  This, in the view of many churches, is what millennials like me want.” She goes on to say, “You’re just as likely to hear the words ‘market share’ and branding’ in church staff meetings these days as you are in any corporate office. … Increasingly, churches offer sermon series on iTunes and concert-style worship services with names like ‘Vine’ or ‘Gather.’ … Still, attendance among young people remains flat.”

A lot of people say they have left the church because they didn’t feel welcome there, and there’s no excuse for that.

Everybody should feel welcome in a church because although Jesus had some wealthy and high-ranking followers, he had many more followers who were nobodies, outcasts, sinners.  We’re all sinners, but some people don’t know it and make a big show of their piety when really all they are is judgmental.  It didn’t impress Jesus.   Instead, he told some of those people to stop looking at the splinter in someone else’s eye and to worry about the big old plank of wood in their own.

So, nonnegotiable, a church should be welcoming to everyone.   But we don’t need to throw out the proverbial (or any) baby with the baptismal water just to make a church a friendly place to worship. 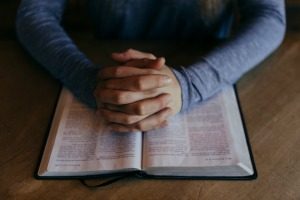 Research by the Pew Foundation and other groups has helped shed some light on why people, especially in that coveted 18-35-year-old bracket, have left the church.  One report by the Barna Group determined that more than 40 percent of young people in one study “have a desire for a more traditional faith, rather than a hip version of Christianity.”  They don’t want to be pandered to.

Evans left the church but came back when she found one that met her needs,  “where every week I find myself, at age 33, kneeling next to a gray-haired lady to my left and a gay couple to my right as I confess my sins and recite the Lord’s Prayer…  No one’s desperately trying to make the Gospel hip or relevant or cool. They’re just joining me in proclaiming the great mystery of the faith — that Christ has died, Christ has risen, and Christ will come again — which, in spite of my persistent doubts and knee-jerk cynicism, I still believe most days.”

The internet has a lot of pretty interesting stuff, including an open letter to the church from Jonathan Aigner, who describes himself as “one of those millennials you can’t figure out.”  Aigner puts it right out there:  “Don’t expect a ‘worship style’ to do your dirty work,” he says.  “Contemporary worship hasn’t worked.  The longer we extend the life of this failed experiment, the more we see the results. In my experience, contemporary worship brings in three groups. Baby boomers who are still stuck in their rebellion against the establishment, parents who mistakenly think that contemporary worship is the only way for their kids to connect to the church, and a small percentage of young adults who’ve never left and who never knew anything other than contemporary worship…

“Don’t give us entertainment, give us liturgy.  We don’t want to be entertained in church, and frankly, the church’s attempt at entertainment is pathetic.  Enough with the theatrics. … Follow that simple yet profound formula that’s worked for the entire history of the church.  Entrance, proclamation, thanksgiving, sending out.  Gathering, preaching, breaking bread, going forth in service.  Give us a script to follow, give us songs to sing, give us the tradition of the church, give us Holy Scripture to read.  Give us sacraments, not life groups, to grow and strengthen us.”

And one more thing, Aigner says:  “Don’t target us.  In doing so, you’ve marketed and advertised yourself into oblivion. …  No wonder we’ve left.  Just be the church. Be yourself.  Use your regular old liturgy.  Offer your regular old sacraments. Sing your regular old songs.  Cast a wide net, and let whosoever will come. Trust me, we’re more likely to show up when we don’t feel like fish snapping up the bait.

“…We need to look into the faces of old and young, rich and poor, of different colors, races, and ethnic backgrounds, so we can learn to see Jesus in faces that don’t look like us.  So we can remember that the kingdom is bigger than our safe, suburban bubble.  That’s right, we need community, not bound together by age or economic status or skin color, but wrought with the hammering of nails on a wooden cross.  Our internet connectivity is just fine. The rest of our lives is a different story. We are hopelessly disconnected.  Church, you can be a powerful remedy if you stop posing as a Fortune 500 company scheming to sell a product.” 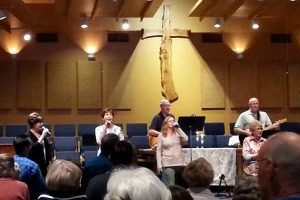 That’s me at worship rehearsal

I wonder what would happen if churches would try both – a contemporary service, and then one that’s more back-to-the-basics traditional? Maybe they’ll both be successful.

I love the people who go to my church.  I really do.  Our church is healthy and vital.  It is growing.  One of the most wonderful things about our church is that the people truly welcome everyone.  They don’t care who you are, they are just happy you’re there.  Still, I’m just saying, a little more ritual would not be unwelcome.

I really like saying the old creeds every week, not just once or twice a year.  Singing the time-tested responses, saying the same beautiful prayers, like this one from St. Francis (below), which our minister used to say as a benediction at my church when I was a kid.  Having two Scriptural readings, one from the Old Testament and one from the New Testament.  Instead of modern creeds for social justice that seem lawyer-mandated, couldn’t we say something like this often enough that my kids would memorize it, and bank it for when they really need it, the way I did?

“O, Divine Master, grant that I may not so much seek to be consoled as to console; to be understood as to understand; to be loved as to love; For it is in giving that we receive; it is in pardoning that we are pardoned; it is in dying that we are born again to eternal life.”

P.S.  This is just my opinion.  I mean no offense to anyone.

I am a Scofflaw

The Dip Machine
Scroll to top