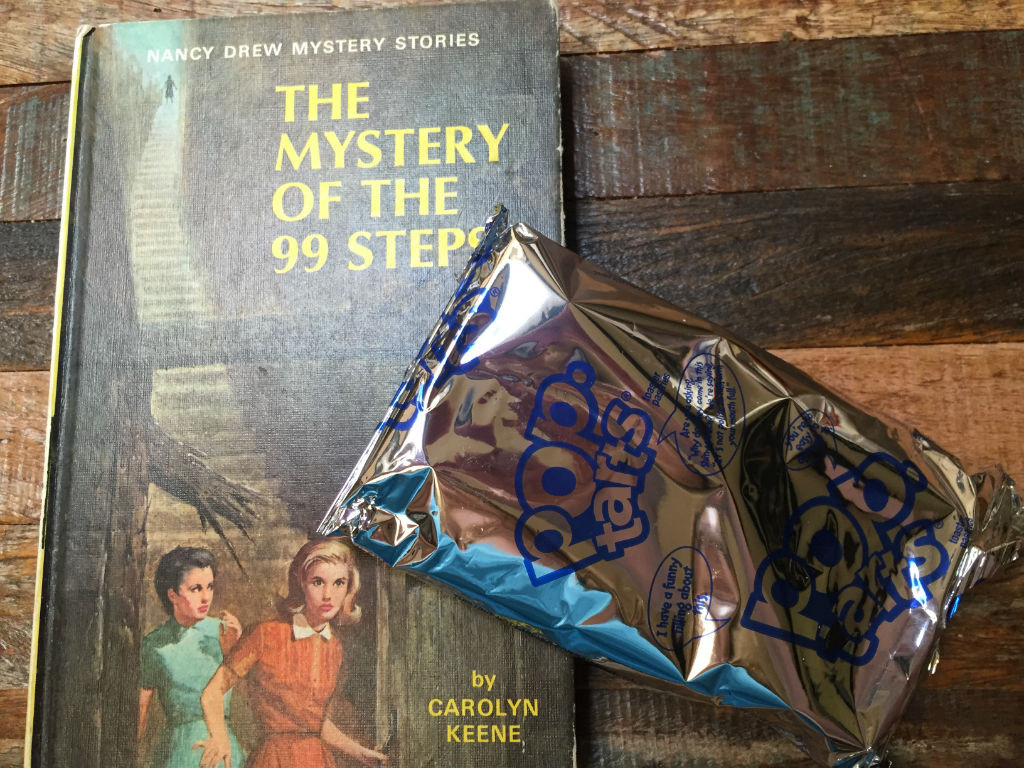 I made a Pandora station called Skyrim Soundtrack. It’s all music from video games, and I love it.  I made another Pandora station called John Williams film scores.  It’s got other stuff I love, especially Howard Shore’s music from all of the Lord of the Rings and Hobbit movies, and tunes by Erich Wolfgang Korngold, who wrote the scores for movies like “The Adventures of Robin Hood,” — the good one, starring Errol Flynn — and “The Mark of Zorro” — the good one, starring Tyrone Power.

I vacuum my shower.  This may or may not be as gross as you think; one of our dogs likes to walk around in there, and always leaves a hair or two as a calling card.

When I was three, I kissed my parents’ little black and white TV screen because I thought Bob Barker was so handsome.  This was way before “The Price is Right” — we’re talking “Truth or Consequences” here.  I don’t know why I did this.

I love kids’ books.  I used to read them with my kids, and now that they’re older, I get them, read them, then try to get my kids to read them, too.  Ranger’s Apprentice, the Brotherband Chronicles, Percy Jackson, the Nicholas Flamel series, and for young adults, the Heir Chronicles.  I also scour used book stores for Nancy Drew books (nothing past 1980) to complete my collection.  My daughter, Blair, and I love reading Meg Cabot books, too.  She reads them first these days; she’s faster (see below).

I love Pop Tarts.  Frosted Brown Sugar Cinnamon first, cherry second.  I grew up in the South, where we err on the side of sweet.  I have learned that this is a regional thing; not everybody does this.  Living in the Southwest now, I have figured out that people here err on the side of spicy.  Chiles in everything.  It’s a lot healthier.  I try to stay away from stuff like chocolate chip cookies, coconut cake, custard pie, banana pudding, chocolate cake, frosted sugar cookies… you see a theme here?  I love them too much.  I’m weak.  And I have learned to love unsweet tea with lemon, something I thought I would never do,  Great sweet tea is the house wine of all respectable Southern establishments.  By itself, it’s kind of like syrup, but when you cut it with lemon — dang, it’s good!  And yet, I’ve managed to wean myself from it.  But by golly, I’m not giving up Pop Tarts.  In fact, a couple of days ago, we ran out, and I scoured the house, looking for that beautiful silver wrapper like a desperate nicotine addict rummages through ashtrays looking for cigarette butts to smoke. I started in my son Andy’s room.  The apple doesn’t fall far from the tree.  He loves them, too.

I do most of my reading in the bathroom.  This started when the kids were little, and it was the only place I could get any peaceful reading time.  Now, I have so many other things to do, I feel somehow less guilty if I just read when I’m in there.  It’s not just on the toilet, thank you for your interest; I just stand by the sink and read a few pages when I’m in there.  You know, when the shower’s all vacuumed, it’s otherwise pretty clean and kind of a nice place to be.  But what about the bedside table, you may ask?  Well, at night I pretty much just read the Bible and then do cryptograms.  Helps me clear my brain and get to sleep.  It works out pretty well for me, but it does take me longer to get through books (because I’m reading them in the bathroom a few pages at a time) than it should.

I love mysteries.  Books and TV series.  I just love the genre.  Favorites include, but are by no means limited to, Helen Macinnes, John Marquand, Agatha Christie, Dick Francis, Ngaio Marsh, Marjorie Allingham, Tom Clancy, Ellis Peters.  And binge-watching entire series on Netflix is the greatest thing ever.  For example, “24.”  The only way that’s even bearable is to binge-watch it.  Who could stand that kind of suspense over a period of weeks?  I come by this love of mysteries honestly; I got it from my dad.  When I was a kid, we’d all watch them on TV together; in fact, I’ve got the great TV mystery theme songs of the 1970s branded on my brain: Mannix, that lovely jazz waltz.  Barnaby Jones.  Hart to Hart.  Switch, with Eddie Albert.  Kojak.  Rockford Files.  Hawaii 5-O, from back when McGarrett was a Lord (Jack Lord, to be precise).

I don’t really like broccoli as much as I say I do.  I love roasted cauliflower, and cabbage, and turnips, and kohlrabi, and all kinds of vegetables.  But broccoli… I’ll eat it, God knows I’ll eat it.  But meh.

I just can’t stand cats.  I’ll eat ‘em, God knows I’ll eat ‘em — oh wait, that’s broccoli.  Just kidding!  When Denzel Washington bow-shot that cat for his supper in the awesome post-Apocalyptic movie, “The Book of Eli,” I thought I was going to hurl.  I don’t have anything against cats; I love watching funny cat videos as much as anybody.  But I’m allergic.  Even if it’s just cat residue on the clothes or furniture of a cat person: my eyes start to sting, my nose gets stuffy, my throat gets scratchy.  Cats know this, too, and in a room full of people who would love some quality cat time, choose me to rub against and purr.  Ugh.

I don’t know most of the films at the Oscars or on the New York Times bestseller list.  If it’s some tormented downer, no matter how deep it may or may not be, I’m just not interested.  Sue me.  That’s why this is called “True Confessions” instead of “Things I Pretend to Like Because They’re Supposed to be Culturally Relevant or Really Important.”  Life is too short, and there are so many sad things in it already, for me to want to put more dismal, creepy, or disturbing stuff in my brain.  The Greeks liked that sort of thing; they enjoyed the catharsis, and if Oedipus falling for a stranger who turns out to be his mother, causing him to put out his own eyes and walk around town blind, worked for them, I say, “Good for you, Ancient Greeks.”  Similarly, if Shakespearean audiences like seeing King Lear ruin his life and go mad, or watch Othello blow it with Desdemona because he is stupid enough to believe Iago, I say, “You do you, Theater-goers.”  Give me “Much Ado About Nothing,” or “A Midsummer Night’s Dream” any day.  Or the Minions from “Despicable Me.”  Or a good vintage Nancy Drew book.  Or a dog.  Especially a dog.