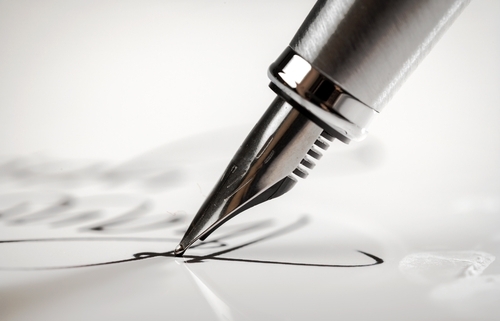 I used to write letters all the time. I had a pen pal in England. I wrote letters to relatives, to friends from out of state, to President Richard Nixon – long before Watergate, and he sent me black-and-white prints from his trip to China. It was no big deal. I would just sit down, dash one off, pop a stamp on there and send it out.

What happened? Now, I crank out e-mails like nobody’s business, but they’re usually pretty short. I’m a fast typist, so basically, I just think and the letters instantly appear on the screen.

Maybe that’s the problem. It is so easy to sit there and type, and click send. These days, for some reason, I find it unbelievably arduous to pick up a pen and apply it to paper. It’s like the pen is made of lead and I’m moving in slow motion, weighed down like one of those sponge divers, tied to the boat with a rope and holding a heavy rock as ballast. Oh, the effort! Can’t… go… on…much… longer…

In shame, I have resorted to Christmas cards that are mainly just a photo, thinking that even though I probably won’t – who am I kidding, I know I won’t – have it in me to write a newsy update to go with each card… Maybe, just maybe, I could manage to lift a pen and sign our family’s names.

Yet even that pitiful effort becomes tormented. Each year, I usually send less than half of what I’ve ordered, which in itself is some ambition-free, low-ball number.

This is a shame, because there has never been such an abundance of lovely letter-writing products available to me. I love to look at the American Stationery catalog. Embossed, heavy stock, beautiful linings for envelopes, monograms, piping, cards, notepaper, personalized everything – you name it, they can do it, and make it look classy and elegant. I even bought a fountain pen, thinking – well, I don’t know, I guess hoping to get inspired by looking at the nib, or something.

This year, once again I purchased lovely Christmas photo cards (with hardly any room for text, and a lovely gold liner for the envelope). Sadly, I don’t even want to use those anymore because I have now lost 16 pounds and the photo was taken on Thanksgiving Day after a huge meal (note to self, don’t ever do that again!) and pre-diet, so I look at myself and think of one of the floats in the Macy’s parade; also, “pumpkin pie bloat.”

On a whim, I also bought some beautiful non-holiday stationery. Note cards, actually; I didn’t want to get too ambitious and then have my few words look even smaller on a large field of paper.   They are very elegant.

I look at them and imagine myself, like Jane Austen or anyone in any of her books, sitting down at an elegant writing desk and attending to my morning correspondence. Or maybe as Donna Reed, writing thank you notes or letters to distant aunts, or sending invitations to my next bridge party or luncheon. I don’t have bridge parties or luncheons, either, by the way. Or dinner parties, which my parents used to have a lot when I was a kid.

Mark and I love the 1979 movie (not the recent remake!), “The In-Laws,” and we quote from it a lot. In one scene, Vince Ricardo, played by Peter Falk, is talking to his son, Tommy, and says, “Remember when we used to play ball on Nagel Avenue?” Tommy tells him that, in fact, they never actually played ball on Nagel Avenue, but “We talked about playing ball on Nagel Avenue.”

Well, we talk about entertaining. We don’t actually do it. We talk about having our neighbors over; we’ve got great neighbors, and it would be a nice thing to do. But we don’t ever pull the trigger and have a cookout, or even go buy food somewhere and put it in our own dishes and pretend like we made it.

I don’t know why. Is the world that much more stressful than it used to be – so much so that when we’re not working, when we’re all home, we just want to nest there and decompress and not do much?

I talk about writing letters.

Maybe it’s lack of muscle memory. I type so much more often than I write. When I was an English major at Vanderbilt, we took tests in blue books. None of it was multiple choice; it was all essays. I remember writing up a storm for every test.  Side tidbit: because I’m left-handed, I would always get that telltale coating of blue or black ink on the side of my left hand, too, because it’s a right-handed world and right-handed people don’t have to sweep their hands across the words they’ve just written and smudge their ink. But I digress. Back in the day, I could write all day and it was fine; it was just something I did.

Now, because it’s not just something I routinely do but I want it to be, I am making the effort. I have written three letters so far on my beautiful stationery. Whoo! Shoot up a flare!

Or maybe, hold your applause. I’m not penning hefty epistles, mind you; in fact, the best word to describe them might be “brief.” Or maybe “concise.” But it’s a start.

Funny thing: I’m kind of enjoying the exercise itself – sitting down, composing my thoughts and trying to put them down coherently.

It’s more thoughtful than just fast-typing or worse, shooting an emoji at someone because I’m too lazy to use words at all.

I don’t know how this year’s Christmas cards are going to go. I don’t want to get ahead of myself; it’s still an effort, and I don’t think the postal service is going to be complaining about the extra work of delivering my voluminous correspondence. I’m not going to be signing up for any pen pal programs. But if you write me a letter, there’s a fairly good chance I will actually write you back – a few words, at least.

Time Travel and Murder, She Wrote

Hallmark Movies: Props for the Prop!
Scroll to top