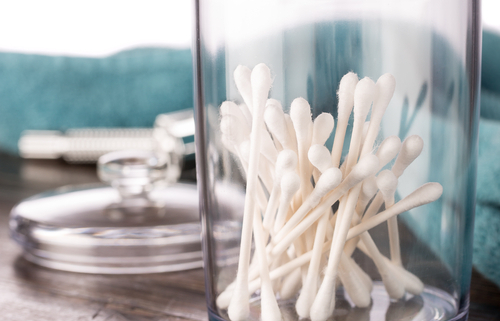 I don’t want to cast shade, particularly about  a Hallmark movie, particularly a Hallmark movie that has Robby Benson – the voice of the beloved Beast in Disney’s animated classic, “Beauty and the Beast,” and, of course, the star of movies from my youth, including “Ice Castles.”  (Note I do not mention “Ode to Billie Joe,” directed by Max Baer, aka Jethro Bodine on “The Beverly Hillbillies,” which could have been so much better and was a sad disappointment.  Spoiler alert: Why didn’t Billie Joe just fake his death and run away with Glynnis O’Connor?)

So I’m not going to trash the movie.  I just want to note two things not related to the plot; no spoilers here!  One, this particular movie, “A Feeling of Home,” featured the worst quasi-Southern accent (it wasn’t Robbie Benson’s character) I have ever heard in my life.  I actually paused the movie, went on IMDB, and found out the guy playing this Texas cowboy was Australian. I thought they could do accents!  Maybe that’s just English actors.  Two, an even more egregious crime:  this quasi-Southern, quasi-cowboy HELD ONTO THE SADDLE AS HE RODE!!! 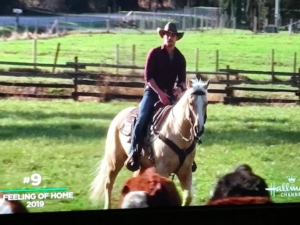 I actually taped a second showing of this movie, so I could make sure I truly saw what I thought I saw.  I regret to say, I was right.  Here’s the photographic proof.  Now, I am not one to judge anyone for holding onto the saddle; who hasn’t?  I certainly did it plenty of times myself, back in the day.  But this horse was not jumping a fence, or slipping down a rocky trail.  It was not at a gallop.  I don’t even know if its pace would count as a trot; it was more of a jog — nay, a brisk walk.

Let’s just take a moment to compare this with another man from the very deep South, and by that I mean New Zealand, and I’m talking about New Zealand actor Karl Urban, who played Eomer in “Lord of the Rings.”  He had many battle scenes, and to do them authentically, he spent hours on his own time learning not merely how to ride, but how to ride mostly just using his legs, so he could use his arms for wielding a sword, holding a shield, or throwing a spear.  What a boss!

Enough about that.  Now, for balance, let’s talk about something good.  And by good, I mean, something it’s hard to imagine living without, and by that, I mean:  Q-Tips. How did humanity get along all these millenia without the cotton swab?  There are many brands, but accept no substitutes:  Q-Tips are the best!  Some brands will short you on the cotton.  And when you do what they tell you not to do but everyone does (stick it in your ear), if you don’t have the name-brand Q-Tip, you might scrape your ear with an inadequate cushion of cotton.  Also, some cotton swabs just have a wooden or plastic handle on one end, depriving you of the opportunity to get the other ear with the same swab.  Not cost-effective, people!

So, in tribute to the humble Q-Tip, I have written this haiku.

Not just a one-sided wand

Cotton on both ends.

Water, after my shower.

Thank God you are there.

For my eyeliner mishaps

Now, while I’m on the subject of life-changing items, can we please take a moment to give thanks for Kleenex?  Actually, Kleenex or Puffs with aloe.  The invention of the disposable tissue was a life-changer.  Yes, the handkerchief has been romanticized in literature and film… a lady drops her lace-bordered handkerchief.  A gentleman picks it up, and takes a moment to enjoy the delicate scent of her perfume.  Or a man lends a woman his handkerchief.  It is monogrammed, and she keeps it close to her heart forever.  Lovely images… but let us consider that people actually BLOW THEIR NOSES IN THESE THINGS.  Here’s her delicate perfume… and here’s her nasal mucous!  Wow, it’s a little off-color; I wonder if she’s got a cold or if it’s just allergies…  Or perhaps she simply cries and dabs her eyes… even then, there’s clean-up.  Here’s her mascara!  Here’s her eyeshadow!  Hello, Shout or Spray ‘n’ Wash, or Tide to Go Instant Stain Remover — other breakthroughs for our times, I might add.

And then, one one bright day for humanity and civilization as we know it, a person of true genius came up with a revolutionary idea:  Let’s throw this away!   Let’s just not have to deal with it later!  Let’s be free of it!  Let us chuck it in the waste bin!  Why isn’t the date of this invention inscribed and celebrated in the annals of history?

So, clearly, we have much to be thankful for.  Even a movie with an accent-mutilating cowboy hanging onto a saddle?  Well… at least the scenery was nice.

Hallmark, Can We Talk?
Scroll to top