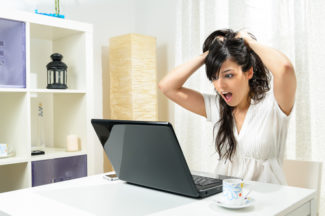 It’s the start of the New Year, and I’m already stressed out – mainly due to constant harassment from technology. “Oh, really?” you may sneer. “Well, why not just turn it off?” It’s not that easy, buddy. Trust me. Here are just a few examples:

My phone: I’m tired of Apple constantly saying that my recently updated phone is not finished being set up because I haven’t done Apple Pay. I don’t want Apple Pay. If I wanted Apple Pay, I would have set it up. But it keeps asking. Stop bugging me!

My dishwasher: I don’t know why; I can’t explain it, but I feel just feel pure outrage and violation when the light comes on my dishwasher saying I need more rinse agent. I just filled it up! I bought a huge bottle of Jet Dry at WalMart. But why do they even sell a huge bottle of it? It should come in a little ampule and an eyedropper, because that’s all the dishwasher holds! But wait – there’s more! It takes a nasty turn. My “smart” dishwasher punishes me if I run out of Jet Dry by making the cycle 15 minutes longer. How dare this machine do this to me? Who’s in charge here? So I put in another micro-alloquot of rinse agent, all this expensive “smart” machine will hold. The dishwasher is pleased with the sacrifice. The digital readout that tells me how long it will theoretically take to wash my dishes – it actually never takes as long as it says – goes back to 2:15 instead of 2:30.

My car: I get crap from my car, too. God forbid if I have to haul something like – oh, I don’t know, just say for a random example, eight feet of floorboard molding from Home Depot. It won’t quite fit. My car, Magnus – it’s a Highlander, so we gave him a name that would be appropriate for kilt wear – starts beeping. He starts out by just being pushy. Then he gets annoying. Then he gets the Red Mist – he quickly moves into rage at being ignored – and the beeping becomes increasingly louder and, frankly, unbearable.

I’m just trying to get home. I have the back door tied down. That’s not good enough.

I looked online, and there is no way to make it stop making this noise. Because it thinks it knows best. (I could stick some cardboard in the door latch, but that might mess it up, and besides, who carries around cardboard?)

The reason for this is that the arrogant designers – the same pompous, smug presumption we see all the time from Apple, which harasses you to update your phone, and then won’t let you actually update it (which I do, just to make it shut up) until you hit the “agree” button, agreeing to God knows what – don’t think I’m an adult who can actually make quite rational decisions, and that I shouldn’t be allowed to drive if the back door is not shut.

There’s a lot of that.

Guess why I don’t have a smart watch? I don’t want some machine telling me I haven’t exercised enough, or slept well. Duh! No poop, Sherlock! I know I haven’t slept well! I was there!   I know I haven’t exercised enough! Happy now? Now? I already have the health app on my Apple phone. I can’t make it go away. It won’t be deleted. If I could put my phone on the washing machine and have it think I was exercising more, I would. Just to make it shut up. I do what I can. Isn’t that enough for you, Apple?

Landline phone calls: I’m tired of robo calls with fake people. I got two this morning, both from spoofed local numbers, so it looked like someone from my town was calling me.

Some innocent-sounding, high-pitched female voice says, “Hello, can you hear me?”   I know what you want, you evil spammer robot hag. You want me to say “Yes,” so you can use that as taped permission to open some account in my name. I always just hang up.

“Hi, this is Angela from credit card services.” Hi, Angela. You’re a robot. Take a long walk off a short pier. Click.

Email: I’m tired of websites saying “We’ve missed you!” when I JUST MADE A PURCHASE. Literally, yesterday, I just bought something, with the 20 percent off and free shipping that you offered. What do you want from me, Williams Sonoma? Pottery Barn, cut me some freaking slack! Dillards, Nordstrom, Victoria’s Secret, Bath and Body Works – you’re downright needy. Amazon, I don’t even like myself for buying stuff from you, because I feel like I’m hurting actual retailers – except they don’t sell all the stuff that I can buy from you. Stop bugging me! I’ll come crawling back, the next time I’m looking for something I can’t get here in town.

It’s gotten to where, if I had any sense of humor left, I would laugh when I saw an email from a store with the words, “Last chance!” No, it’s not. Something else will go on sale tomorrow.

And frankly, I don’t need anything.

I Do Not Need Anything.  It’s important to realize this.

TV:  HGTV sells dissatisfaction, disguised as serenity and happiness and shiplap. I love HGTV, don’t get me wrong. But you know why all those made-over homes and rooms look so beautiful? First of all, it’s because they decluttered!  They’re crap-free!  More than anything, that’s what makes your home look good. That, and a coat of paint.

Get rid of all the clutter, and any place is going to look more Zen. Add a houseplant, paint the walls a lovely shade of white, and boom, it’s already more serene. But who can live like that? If I really followed HGTV’s advice, I wouldn’t have books double-stacked on my shelves. I would have just a handful, hard cover, matched by color, and maybe a nice Mason jar tealight candle. Actually, in Country Living magazine, I saw books placed on shelves BACKWARDS, so you couldn’t read the spine! It looked more restful that way. WHAT THE HELL! Hey, I want to read a book: I like this one. It has a nice width! Said no one ever.

Charities: I’m tired of pushy charities. If I make a donation out of a burst of goodwill to an organization, I wish I had as much money as I really don’t want to get envelopes in the mail with the words, “Your Account,” or “Membership Statement Enclosed.” I’m not a member! I just made a freaking donation! We don’t have a relationship! I’m sorry I ever gave you money in the first place!

One organization, which shall remain nameless but is located in upper New York State, has a bird app that is really cool. My son, Josh, loves it. I downloaded the app and from the get-go started getting online appeals to Save the Birds. I made a donation and thought, “Good, I’ve done my part.” Wrong! The emails doubled down! “Triple Match Alert! Give now and a donor will not just double, but triple your gift!” Emails several times a week, sometimes daily.

No! I’m not the dang bank machine.

Bah, humbug! And it’s not even Christmas!

Losing It
Scroll to top