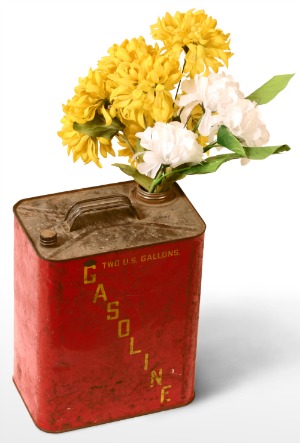 Josh was late for school because I forgot to get gas last night after choir practice.  I didn’t get gas before choir because I was already late for that. The car holds 18 gallons. I put in 17.972 gallons.  So basically, we started the day running on fumes.

I’m not feeling like Super Mom today.  What’s new?  Although there are some days when I nail it – remember in “My Big Fat Greek Wedding” when Toula Portokalos starts working for her Aunt Voula’s travel agency, and she’s on the phone and computer and zipping around in her rolling chair, just on fire with efficiency and greatness? – most of the time I feel that I don’t nail it.  Maybe I staple it, or just hold it together with Scotch tape. We have duct tape, which would be better, but I don’t know where it is.

Most days, I get up, let the dogs out, feed them, clean up whatever’s in the kitchen, empty the dishwasher, get some laundry going, fix the lunches, give Josh his wake-up call so he can snooze, fix breakfast, throw on some clothes and brush my teeth before we head to school.

I also put on lipstick and brush my hair.  This is for two reasons: One, because my mom always said, “Don’t leave the house without lipstick.”   Two, because I always have it in the back of my mind: “What if the day goes horribly wrong and there’s a mug shot and it gets printed in the paper?”  At least, I’ll be wearing lipstick and a bra.

I suspect that most people don’t think these things, but who knows, maybe they do.

Yesterday was just a bust.  I mentioned that I was late for choir practice, but that was just toward the tail end of the chain of “meh.”  Before that, I had busted my gut to race out to our local charter science high school.  Our older son, Andy, went there, and it is wonderful.  But they have a lottery for kids to get in, and we had been told that the drawings would start very soon.  I scrambled for Josh’s birth certificate, SSN, and a utility bill to show that we actually live where we say we do.  Throughout the day yesterday, I had dragged the multi-page application form from place to place, filling it in whenever I had a few minutes.  Finally, it was done!  I booked to the school before it closed for the day, and the lady at the front desk said that the lottery for Josh’s grade would start September 1 at 7 a.m., and there would be “a line around the parking lot” at that time, so that’s something to look forward to.

Before that, I had spent 15 minutes on hold with the doctor’s office.  All I wanted was to get permission, aka a referral, for my dang annual mammogram. But that would have been too easy.  Although I had seen the doctor several times last year and actually had surgery, that didn’t count.  This woman finally came on the phone and said, “This is Pat.”  Like that’s helpful.  I don’t know who she is, or care, frankly.  No offense to Pat.  “Yes, you were here for some gyn-e things” – I was not familiar with this term; it rhymes with shiny – “but you didn’t get a breast exam.”  So before I can get the mammogram, I have to come in for a documented physical.

In other words, they are holding my mammogram hostage.

The whole day was like that.  Earlier this week, I saw that an illustrator named Yao Xiao has done a series of illustrations showing how to be more positive by saying, “Thank you,” instead of “I’m sorry.”  For example, instead of “Sorry I’m just rambling,” how much better to say “Thank you for listening.” Or, instead of “Sorry I’m kind of a drag” — “Thank you for spending time with me.”  Xiao figured out that having gratitude and apologizing are a lot alike, but saying thank you makes both parties feel better about themselves.

So, thank you for listening.  Thanks to my family for putting up with me.  Thanks to my car for not running out of gas.  Thanks to God for a family to take care of, and another day to do it.