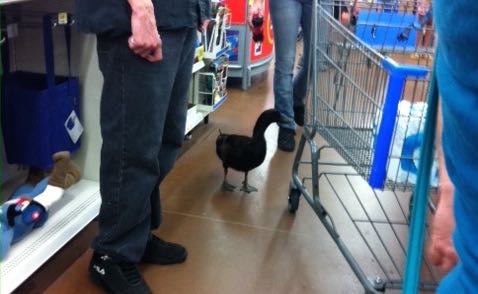 In our small Arizona mountain town of Prescott — pronounced “Preskitt,” rhymes with biscuit — there are two Fred’s grocery stores.  In our family shorthand, they are “North Fred’s” and “Rehab Fred’s,” because the latter happens to be near a lot of drug and alcohol rehab places, which we seem to have a lot of in Prescott.  The clientele at the North Fred’s is more suburban; the Rehab Fred’s is more quirky.  That’s okay.  Prescott is quirky.

At the nearby Wal-Mart, for instance, it is routine to see cowboys wearing their sidearms strapped to their belts.  I have given up being fazed by people sporting pajamas, or wild, enormous tattoos, or anything that might have turned my delicate head back east.  Live and let live, it’s Prescott.  I just push my cart.  Once, though, at Wal-Mart, out of the corner of my eye, I noticed something dark and small behind me.  Very small, too short to be a person.  That’s because it was a duck.  A black duck, just standing in line.  He seemed to be hanging with two human companions, by their cart.  I sneaked a picture with my phone.  Later, I mentioned it to someone who works at Wal-Mart.  “Yeah, they come here a lot.”  What I love about my town is that nobody batted an eye.  A duck in the express checkout lane … that’s just Prescott.

Today I went to the Rehab Fred’s, trying to hurry, as always, so I could come back home and get to work.  There he was, my least favorite cashier, Mr. Grumpy.  I have written about him before.  He has a thing about scanning the Fred’s VIP card before he will scan a single grocery item.  He won’t move without that card.  I don’t like this, because if I’m behind the cart, trying to put its entire contents on the conveyor belt as quickly as possible, I don’t like having to push the cart aside, take those two extra steps — it’s the principle of the thing — and give the guy my card.  He is the sole exception in all my Fred’s shopping experiences; every other cashier will just start scanning.  The cash register doesn’t care; you still get the VIP discount.  Not Mr. Grumpy.  In the past, he has actually folded his hands and waited until I gave him the card before he would scan a single item.  Not even a bunch of grapes, or a single bottle of ketchup.  He would not scan them with a mouse, he would not scan them in a house.  He would not scan them at all, the louse.   Today, I wasn’t having it.

“Do you have your Fred’s VIP card?”  Yes, I said, “but can I give it to you in a minute?”  He sighed.  “I guess so.”  The bagger guy stepped forward and asked if he could help me unload my cart.  “Yeah, she needs it,” the cashier said.  Grr.  Still, I count it as a victory.  On the way out, in succession, I saw three things.  One was a lone piece of broccoli in the parking lot.  I took a picture of it.  As Samwise Gamgee said in Fellowship of the Ring, “I don’t know why, It makes me sad.”  Two, a bumper sticker:  “Honk if you really need to poop.”  Why would anyone have this on his or her car? To feel solidarity — no pun intended — with anyone who honks?  Seriously, I am baffled.  Then, another bumper sticker:  “Constipated people don’t give a poop.”  Except it didn’t say poop.  Again, why this needed to be said is a mystery to me.  I don’t have a bumper sticker, but if I had to choose one, it would probably have a happy dog on it or something.

But live and let live.  It’s Prescott, where life is generally pretty good.

This post and all blog content Ⓒ Copyright Janet Farrar Worthington. P.S. I changed the name of the grocery store.