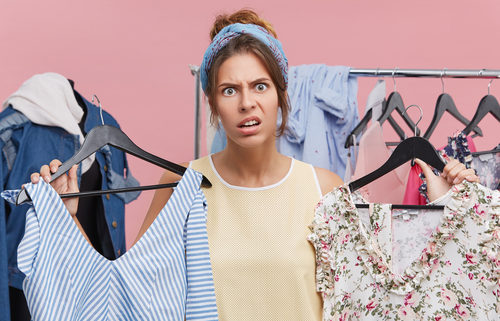 You know why I look so good in my makeup mirror? The lighting. Whoever figured out that bright, whitish lights, coming from below, produce flawless skin and just generally make the world a better place was a genius.

Light from below, you say? Like Lon Chaney or Boris Karloff, or Severus Snape in Harry Potter? No, of course not! Don’t be ridiculous! A flashlight put directly under the chin makes anyone look spooky and awful. That’s not what I’m talking about at all.

All I’m wondering is why they don’t have light like that everywhere.

Restaurants! Who needs candlelight? Just beauty-light me, and I’ll sail through dinner with confidence and poise!

Department stores! Ka-ching, ka-ching! Glorious beauty lighting makes everything look good! Your customers will be more likely to buy things instead of putting them back and skulking away in shame. Or maybe that’s just me…

Instead, dressing rooms are so very dreary, with hideous fluorescent light that imparts a greenish, bilious skin tone, invents or highlights bags under the eyes, gives you cellulite where you don’t actually have any, adds 20 pounds, and just generally makes you look like crap.

Let me just take a moment to say that when I was a kid, we used to shop at Sears and when that Wish Book came in the mail around Thanksgiving, I immediately stopped everything, lay on my stomach on the living room rug and read that thing cover to cover. I dog-eared numerous pages of things I didn’t even want – like sheets! Just because they showed a pretty canopy bed with matching pillows and beautiful bedspreads. They really knew how to make stuff look tempting and good.

But now? Fuggetaboutit. Walk into Sears and, first of all, at least in the Sears stores I have ventured into and quickly escaped over the last decade, there’s the dead silence. Pipe in some cheery music! Then there are the grocery carts. And zero sales clerks in the individual departments; they’re at centralized checkout stations that exude the efficiency and joy of Eastern Europe in the Cold War. I remember when people used to be clerks in one department, like lingerie, or hardware, or children’s shoes, and that’s all they did for years. They were experts, and the best of them knew you and your whole family. It was their career.

Shopping carts in a department store! What moron came up with that idea? When I go buy clothes, I don’t want to be pushing around a grocery cart. Maybe the big idea is something like: “Give people a cart and they’ll fill it up.” If I want a cart, I’ll go to Walmart, and buy some canned goods or cleaning products while I’m there.

No. Mall stores should spend their money on better things – like vacuuming the bleak, depressing carpet in the dressing rooms. In a lot of them, it’s dingy and stained, too. And who hasn’t been simply minding his or her own business, trying on clothes, and stepped on a straight pin? That’s a mood-killer. The worst was in a mall in Baltimore, where they actually had to put up signs asking people not to change their baby’s diapers and/or go to the bathroom in the dressing rooms. What is the thinking process there? One stall’s pretty much like any other? No, see, one actually HAS PLUMBING.

Misuse of the dressing rooms aside, I feel that many retail stores are out of touch, and this is a shame. I grew up going to the mall. I love malls – when, that is, they’re full of life and people and not dismal, half-empty shells with boarded-up windows from stores that have folded. We have a really nice mall here in Prescott, but the genius owners imposed rents that were too high, and stores couldn’t stay there. Many have folded. Right after we moved in, the Barnes & Noble folded, and it broke my heart. I can’t tell you how inexpressibly sad it was to see it empty – and then how much sadder it was, for me at least, to see it with the walls painted black for an indoor lunar mini-golf course, which that space briefly became.

Books are sacred. Bookstores are, too. To lose one is like saying goodbye to a friend.   The remaining merchants at our little mall are trying so hard to hang on, and many of us here in town are shopping there and rooting for it to come back. J.C. Penneys and Dillards seem to be doing well, and amazingly, we just got a Sephora.

I love Dillards and although we don’t have one here in town, I love Nordstrom. I get emails from both all the time with suggestions “just for me.”   These are not good suggestions! Here are some fashion trends these stores recently suggested for me in emails:

“Romantic bodysuit.” As in, crotch snaps. No, thanks. I did that in the 70s, and they never stayed snapped. True story: I was not a svelte child. My mom enrolled me in a ballet class and she bought me a leotard, but she didn’t realize that it was actually a body suit. Every time I moved around too much, snap, snap… Not good.

“High-waist jeans.” No! The only trend worse than this would be, “high-waist jeans with PLEATS and peg legs.” Designed to give you the shape of a bowling pin.

“Menswear details.” This one sounds possible… Kathryn Hepburn pulled off that look all the time. But this particular menswear detail they’re showing me is a shoe that looks like something the Pilgrims might have worn, with a high chunk heel, except with a fringe tassel instead of a large buckle. And it’s metallic gold! Hello, Rust-Oleum!

“Bell sleeves.” Three inches longer than my hands, guaranteed to get in any plate of food. Not recommended for eating biscuits and gravy, maple syrup, spaghetti, or soup.

“Giant gaps between the sleeve and shoulder.” I don’t actually know what these shirts are called, but they look stupid and if I were to get one and wear it often, people would say, “There she is again in that shirt with the big holes in the shoulders.”

“Flare-leg jumpsuit.” No. Whom do they think they’re dealing with here? I lived through the Seventies! I was there, Gandalf! Yes, it looks great and dramatic, very Diana Rigg as Mrs. Peel.   Imagine yourself wearing it… and then having to use a Port-o-Pot, or a public restroom. Maybe one with an under-sized stall, the kind where you have to take your purse off your shoulder so you can turn around and get the door closed, and you end up holding it because you don’t want to set it down because there’s moisture on the floor, and/or something worse: grossness. Ugh. See, with a jumpsuit, unless they come up with a Union suit-type butt flap, you’re out of luck if you have to go. You can’t just lower the pants only. The whole thing has to come down. Not good.

And yet, I also realize that today, we don’t make enough of an effort to be beautiful at all times. Not like they did way back when. Even the pioneers looked better than I do half the time: I know this because I’ve seen Fess Parker’s wife, Rebecca Boone, played by Patricia Blair on the old TV show, “Daniel Boone,” and even though it was back in the early 1800s, she managed to keep her hair sprayed, her updo looking smooth, and her false eyelashes on straight.

Similarly, “Big Valley,” late 1800s in Stockton, California: Barbara Stanwyck and Linda Evans managed to convey “respectable gentry” with their turtlenecks, bolero jackets, and blue eye shadow. And they didn’t even have electricity! Shame on us looking less than our best, with all our modern conveniences! We need to try harder, ladies!

But not too hard. I say this with love to Hallmark. I love Hallmark Channel movies, but somebody needs to do an intervention and dial back the hair dye on the men and women in their mystery movies. That’s about all I’m going to say on that, but just look at it sometime. The hair is way too dark on many of the people in Hallmark Land.

They just need to go back to the basics, and focus on the one thing that makes everyone look good: Beauty lighting.

Journey to the Land of Books? Rain Check!

Advent and Signs from Heaven
Scroll to top