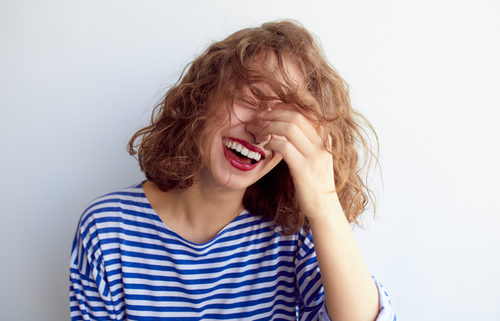 At 6:30 this morning, I was standing in the kitchen, dying laughing. Usually, I’m barely functioning at this time of the day, walking around like an old person, with a righteous bed head, just trying to make myself some iced tea so the caffeine can get in there and help me function.

But when the alarm went off today, I was in the middle of the craziest dream. And so here I was, trying to convey to my husband, Mark, the true hilarity of it – at least, it seemed like a laff riot to me. I was with my old boss at the Public Affairs office at Johns Hopkins. We were filming a commercial for the Department of Neurology, for which I am currently writing a book. A young Dan Ackroyd was there on camera. I could see the cue cards he was reading. With his best huckster voice, he was hard-selling something, and putting down the competition: “That’s nothing but pink sweevum, folks!” And when he said this odd word, he drew it out, like “sooey,” and his voice went up in pitch. The cue card spelled the word phonetically. I know this, because the first thing I did (after I got some caffeine in me) was write it down: “SOOOOEEVUM.”

I have no idea what this word is – I’m pretty sure it is not actually a word at all – but I kept saying it and cracking myself up.

It’s pretty nice to start your day with a laugh.

I think, the older I get, the more I appreciate Uncle Albert from “Mary Poppins.” Maybe you remember him, played by Ed Wynn, floating around near the ceiling, because laughter made him lighter than air. “I love to laugh,” he sang, “Loud and long and clear. I love to laugh. It’s getting worse every year!”

This is the opposite of what’s happening in our world right now. I think there are an awful lot of people who read the news and then their brain goes, “Hate, hate, hate.” Then maybe they get on social media, write nasty posts, get more fired up, and their brain goes, “Hate a whole lot, hate even more, grr.” It’s like eating something fried, putting ranch dressing on it, getting terrible heartburn, and then eating ghost peppers, and getting worse heartburn and maybe even fiery diarrhea. This is self-inflicted, people! It’s Orwellian. Seriously, in 1984, George Orwell wrote about the Two-Minute Hate, where every day, the whole society of Oceania had to watch a film that ginned up hatred for their enemies, and then express that hatred for precisely two minutes. This, in Orwell’s view, was hellish. In my view, this is what a lot of us are doing every day, for a lot longer than two minutes.

One of my relatives was a wonderful person. I loved her very much. But man, did she enjoy battling her enemies. She’d get all riled up about something, and then write letters, go to meetings, and just talk about whatever it was. Her face would get all red. My dad used to say “She runs on acid.”

I think the world runs on acid right now.

On Facebook for instance, I don’t do anything political. I just won’t. All I post is either stuff about work (rarely), pictures of my family (also not very often), and terrible puns. I know they’re terrible! That’s why I do it. I just want to make somebody smile, and maybe inspire my friends to come up with bad puns of their own. That’s all I want to do.

I also look for the humor whenever I can. Now, don’t get me wrong: I don’t laugh at people; I’m laughing with them. There is an expression, “the human comedy,” although I saw a movie with that title, set in World War II with Mickey Rooney and Van Johnson, and oh, man! What a downer! So it’s not that particular human comedy.

My pastor’s favorite movie is “Pollyanna.” It is a wonderful movie, in which Hayley Mills looks for the good in people and finds it.

Well, I look for the humor, and I often find it. I don’t even deliberately try, but things just strike me as funny. I can usually find something that makes just about any situation seem not so bad. Again, don’t get me wrong. I’m not going to be yukking it up over a school shooting, or natural disaster, or bad medical diagnosis. Too many things in this world are just plain painful, or horrifying, or heartbreaking. Of course I know that.

There are a lot of things in this world that make me cry. But I laugh when I can.

For instance: A couple weeks ago, I was in the doctor’s office, waiting for a routine visit. I sat there for 45 minutes waiting for my appointment, which took all of five minutes. I had brought a book, but the people-watching was so good, it was kind of like a dinner theater, without anything to eat. Or drink. But really, it was like a show.

A lady came in, and said out loud for the benefit of the entire waiting room: “I’m late, I’m late.” Not only that, but she said it in this creepy singsong, little-girl voice. I wanted to look away, but I couldn’t. She continued, still for the benefit of the whole room: “First, I had to get rid of the satellite TV installer. My doggie didn’t like him.” If you’ve ever seen the movie, “The In-Laws,” with Alan Arkin and Peter Falk, you may remember one scene where Alan Arkin, who plays a dentist named Sheldon, is just appalled at something, and he has one palm on each side of his face and his mouth wide open; he just can’t take it in. I sat there and thought about Sheldon. But not for too long…

… because about one minute later came another woman, who had the stage presence of Elaine Stritch, the Broadway grand dame. She was moving extremely slowly with her cane, and she stopped in the doorway and announced, “The mechanical door does not stay open nearly long enough.” But she said “dwoah,” and “lwong” with a New York accent. Just a captivating entrance. Bette Davis caliber.

And then, immediately after her – I don’t know if he was with her, or was a party of one – came an older guy, who said all in one run-on sentence: “There are plenty of places to sit but not anywhere to lie down and that’s what I really want to do is lie down.” He kind of reminded me of Mr. Carlin, one of psychologist Bob Hartley’s patients on “The Bob Newhart Show.” The nurse came at that point and called me back; I kind of hated to leave.

On the way home, on Willow Creek Road, our local version of a racetrack, this guy tailgated me in the left lane. I moved to the right lane, he gunned it and dramatically passed me. I then moved back to the left of him into a turn lane, and as fast as he had gone, we were sitting side by side at the red light. He turned his face away from me – yes, it is awkward, isn’t it, when you ostentatiously pass someone and then they catch up to you – but I could see his hands on the steering wheel. He was wearing driving gloves. I laughed. Clearly, if I had seen his face, I would have seen Dick Dastardly from the old cartoon show, Wacky Races. “Curses, foiled again!”

A lot of hassles in this world are nothing but pink sweevum, folks.